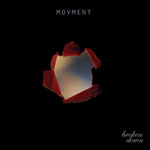 Movment
Album: Broken Down
9 Tracks
Available now from the Distort The Scene Store and Bandcamp.
Listen to some tracks from the album below